Okay, so we got pending approval for the race date. Looks like it is a go. As soon as it is in writing, we will have the flyer out, and will start spreading the word to out-of-towners. In the meantime, go ahead and count on being at the race on March 1st at Red Bug – or start planning your excuses now.

Whew am I tired of hearing people complain about the cold. Man. Go ride yore bike. I mean, I am sissy when it comes to riding in the cold, but I don’t go anouncing it to everyone. 007 was out riding his bike in the snow yesterday, and many people up north would love to be riding in 45 degree blue sky weather. Yeh, its cold. For Florida. It still beats sitting on the trainer, and ya gotta get the miles in of you want to be fast this spring. Chuck the deuces and ride out – boyZ 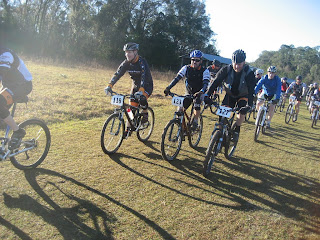 Felasco is something different for each of us. For some it’s about finishing. Maybe we have not done too many long rides in awhile. For some, they’ve never done anything this long. Maybe it’s about personal bests. The distance, for others, is no big deal. They just want to knock it out and check their score. Still others try new tricks for spice. Maybe it’s the first time on a single speed, or the first on an 8″ free ride rig. I saw one kid roll out on a unicycle. Poor bastard.
For me, it’s about all of that to some degree, but mostly about hanging out with the crew. Everyone gets a kitchen pass for this event. Guys who never do road trips, are yelling “Shotgun!” in the parking lot, and wrestling for bike space in the hotel room. In twenty years, this crew has seen many come and go, but quite a few are still around. We had about 18 guys with us this year. How’s that for a crew to hang with?
The Friday night festivities were outrageous. I’m glad to see we still have it in us, though it doesn’t get seen that often anymore. That night alone will provide plenty of ride conversation for the year to come. Saturday saw another train of T-towners leave the lot together. This year, the Bikechain kits were in effect. More than one poor soul muttered under their breath, when they pulled over and realized there was a chain of nearly 20 Chain Gangers they had to watch pass by, before they could continue their own saga.
This year I hung at the back. Last year, I took off and tried to keep a decent pace rolling. But, when at dinner, I heard all of the stories from the back of da pack crew, Bikediet and I looked at each other and realized we’d missed out on something. It’s tough going slow. Almost as tough as going fast, just different. But riding in the Humor Caboose paid off. Laughing and heckling stave off the pain. Everyone has their ups and downs, but you try to take care of each other. That works until the hate fatigue is just too deep, but that’s not usually until the last 5 miles or so. By then, everyone wants to be back at the truck, hanging over a tailgate, lying about how great they felt.
This ride is in the books, and I for one, had a blast hanging with the crew.
p.s. Lil’ Ronnie, you’re forgiven for yelling at me before lunch. I realize that all of that emotion is tough to keep inside. Let it out, tough guy, let it out.
p.p.s. Be sure to check the pic. There’s a who’s who of the Chain Gang in there. Bikechain, Bikediet, Micro, Spanish Mackerel, the better half of Derwood, Wrecking Ball, Crawl, The Tick, Flash, your’s truly….

Felasco is in the books. Those of us who have been riding over the last few months made it without incident as expected. Those who we worried about, who did not put in as many miles in preparation, did exceptionally well (i.e., Spanish Mackerel and Red Dragon).

This lesson was learned long ago, but reiterated over the weekend. Don’t compete against the Whittington’s in ANYTHING. They are freakishly strong, and their competitiveness is only outmatched by……well nothing. This updated lesson came in the form of a beat down in arm wrestling against Marko. If you piss off a Whittington turn around, find the nearest exit and run the hell out of there. Of course they are also freakishly fast, will catch you, and beat you senseless. 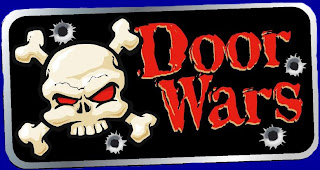 So there I was doing all the wrong things. No rear light, no head light, no blinkie, no reflective clothing, reflectors removed from my Timbuk 2 bag, etc… Roll out from work around 5:30, blast down Richview, shred a piece of Fern and make a pitstop at the shop (for a biological). I get back on the bike and head down Goose Pond Trail. Fight the traffic on Centerville road/Blairstone (both directions) and pick Goose Pond back up. By the time I hit the climb on Hermitage – it’s dark, I mean cloudy dark, I mean I’m going to get run over dark. So I limp up on the sidewalk trying to fool myself the knee will be OK in Felasco. As I sneak on to the access road/sidewalk behind Home Depot, I realize this is a bad time to remember the sidewalk does not go all the way to Raymond Diel. Now, it seemed like a good idea to ride through the construction site at the flyover, but I had to get there from here. So, as I am creeping through backed up traffic in the right hand left turn lane, wham! Out comes the passenger door of an SUV. A rich, punk kid in his buddy’s SUV, spitting out a dip so momma won’t smell it when he gets home. At least that is the story I make up because I hate him. I have no reason to hate him but it scared the crap out of me. I was lucky. I press on after swerving around the door – and exchanging glances. I can hear his muffled voice bark some redneck saying. I just have to get to Killearn, them I’ll do a modified Thursday night loop to make it home. Commuting is addictive. 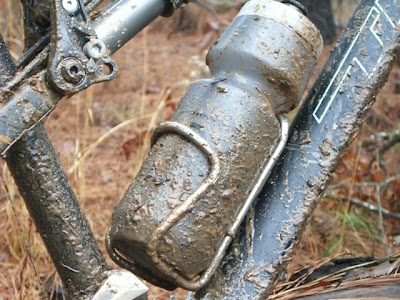 Saw this picture floating around Bikepossee, did Slaton poop his pants again? 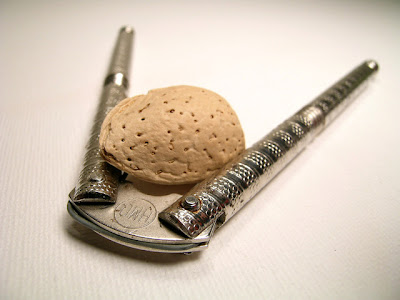 On Christmas I was drunk.  I threw down the gauntlet(Red Dragon style) to ride one hundred miles New Years Day, worst of all, there were witnesses to my retardation.  I was committed at this point, rain was my only out.  I ended up riding 103 miles and according to the all knowing Polar, 6034 calories, shouldn’t I be clinically dead after that?  I was not going fast, but pedaling for 6 hours and 40 minutes really takes a toll.  I felt good and was happy with my completion without the disasters of the first “Felasco Assessment Ride”.  If I had not done it, I would have felt like a punk ass for bailing on my own gauntlet throwing.

The Bikechain.com jersey was well used.  I promoted Bikechain.com in at least 9 cities and it worked better than it looks.  The earphone port in the back pocket is the shiznit.
Happy New Year to all of the crew and see you suckas in Felasco.