Great ride on Sunday. Unfortuantely the numbers twindled as the ride went on. A little weird that out of 5 guys I’m the only one with hair on his legs. 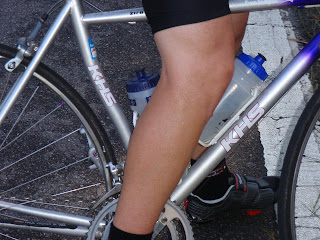 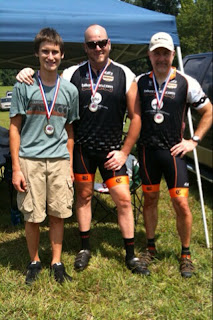 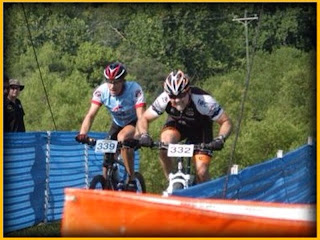 Ok, so let’s rap this thing up. On Saturday Me, Big Worm, Ice Berg, and Graham Cracker piled in the truck and made the long drive to Helen for the last of the Georgia State Championship series. Big Worm and I had participated in most of the series races with Ice Berg and Cracker just tagging along. Longshanks and his wife headed up on Thursday to make a long weekend of it.
I was so stoked that this was the last race in the series and I can promise you it will be the last series I commit to.
The trip up was fairly uneventful. We made the usual stop at the sausage place so Worm could get his fix. We were pretty happy once we finally made it into Helen, only to find out that place stays crowed with tourists all year long. It took us 30 minutes to get through town before we could make our way to Unicoi for our pre-ride.
The trails at Unicoi are awesome. Nothing real technical and the trails were in great shape. Plenty of climbing but all were doable. The descents were fun (even though I loved my brakes on most of them – I’ve got to work on this weakness). Berg and Cracker did their thing while the Worm and I decided a slower pace would be more appropriate for a pre-ride.
When we get back to the truck I see foot doc at the parking lot. Foot doc was only 2 points behind me in the series points (me in second and him in third). He notifies me that he will not be racing the next day due to an injury he sustained in the Ellijay race. Sucks for him, but my race just got easier. The fourth place guy was 4 points back so he should not be a problem.
A walk in the oven (it was hot), some mediocre food (but good beer) and we are back at the hotel for an early night of it. Sunday morning comes and we are off to Unicoi. We find a good park, set up the tent and Worm and I get ready for the early wave start. Thank God for this. It was brutally hot and we knew the second wave guys would be suffering.
I’m not quite as terrified as I usually am before a race but the butterflies were still there. Worm is off and I am awaiting my start. Small group this race as only 9 guys show up. We’re off and I am second going into the woods behind “evil bastard.” Of course the race starts going uphill and then a sharp switchback. EB hits the deck while trying to negotiate the switchback. I get around and am leading the race. Roadie dude is on my wheel and stays there for a while before he decides to get around. He’s gone. By that time EB finds my wheel. He stays there for most of the .lap. We start discussing politics and the state of the current health care system before he realizes I can’t climb worth a damn so he gets around and he’s gone. I keep a steady pace and start picking guys off from the other groups. I’m starting to think that a third place finish would be respectful and this way I am assured of my number 2 series placing. Every now and then I can spot roadie dude in front of me but never really could bridge the gap. I’m tired of climbing and my heart rate is way up. I’m ready to be done. I pop out of the woods, think “thank God” and start to make the 75-100 trek to the finish line. I look back to see who’s behind me and thought I saw a guy in my class. I amp it up then look back again. The guys not coming (he ended up not being in my class). I look up and notice roadie dude right there. The kick in the balls for this race is that the last 30 fee or so is straight up. I kid you not that sport guys were walking up this thing. Well luckily for me roadie guy did not know I was coming until it was too late. I was in the perfect gear and he was not. I stomped it out, caught him, and beat him to the line by about a foot or two. I was stoked to have stolen second place.
Big Worm finished up and got his first place finish. Who cares that he was the only guy racing in his class.
Graham Cracker destroyed his field. This kid flew. I know because he flew by me during my race. What’s amazing is that he hit something that stung him on the mouth about 10 minutes into his race. His mouth swelled up like a life raft.
Berg being the amazing racer that he is (if you don’t believe me just ask him) destroyed his field as well.
Longshanks in his first expert race suffered. Three laps and a hot day made the conditions tough. It still looks like he had a respectful finish. I sure wish I had your toughness LS.
We hit the series ending awards ceremony where BW and I collect our plaque and swag, jump in the truck and head back home. I’m in the door about midnight, announce to the wife that amazing his home, show off the swag and hit the bed.
Georgia series in the books.