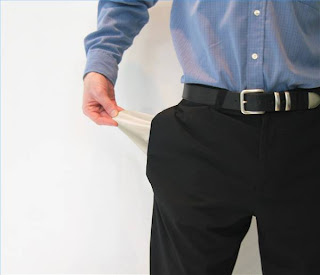 Sup fellas. I wanted to apologize for being out of touch. On top of some turbulent times in a variety of segments of my life, I had one of the worst back episodes ever. Major suffering. Can’t lay down type pain. I begged for some pain killers, got em and they helped. Pretty much zonked me out though. Anyway, let me know if I rubbed you raw. BTW, bring on the innuendos.

As the title states, this weekend was like an out of order four course meal.

The entree’ came first. It was a small, but great ride. I met Jim, Chris and Steve for a little east side mtb’ing. After they were tired from trail maintence, I went and threw down some washed up expert beatin’ on ’em. Helping my unexplainable urge to ride hard was the fact that I was on a full suspension bike – with gears. Something I haven’t done in awhile. Man, you can really go fast with a big ring.

Then, I cleansed my palate with a nugget of a challenge. The boys (Jim and Steve) talked me into doing the Turkey Trot (5k, not the 10k version). It wasn’t hard to do. A few minutes later at the after ride lunch at Tijuana Flats, Zak was comitted too.

Next up was the cheese and crackers. On the drive home I reflected back to the last time I ran 3 miles. It was with Dan over a year ago. The time before that was with RC, probably two years ago. On both occasions I was incredibly miserable and way out of shape. My problem ankle was, well, a problem. I started to think I had made a bad decision to do this run. So, off to test the waters I go. I put in about 25 minutes of running (at least three miles I hope). No real significant pain; probably due to the Mona Vie Active that I drink 🙂

I cleanse my palate again. This time, between courses, I opt for the hunching over the kitchen counter while trying to warm a bottle of milk and not pass out from oxygen debt maneuver. Success.

Then came the appetizer. Well it was like an entree’ but there was not enough food to be considered an entree’, so it was an appetizer. The wife and I had another date night. After a trip to Target, we headed to Tapas for some overpriced, ill portioned food. I have to admit, though, the food and ambiance was great. Because we got to Tapas so early, we had the whole place to ourselves. No one else. I can’t remember what we had, but it came on large rectangular plates and the water was served in tall skinny glasses. Its a pretty cool place. Kinda like Mozaics and that other place I used to hate on Monroe Street. Not much bang for the buck, but definitely good food, good times.

The salad came in the form of reading through the ride emails for Sunday plans. I laughed out loud (thats LOL to some of you) when I saw Dariens emails. Saturday night he was this tough, single, care free cyclist ready to go ride. The only thing standing in his way of a four hour cross ride was getting the address for where the ride was starting. Then, come Sunday morning, he is daddy pee pee poo poo pants and not only is he not going to be riding that day – he probably won’t even step outside of his own house.

Finally, dessert. We didn’t get to select it, as in “by choice”, but boy was it good. The ‘ole lady and I were on a walk with the dogs and the baby. We were heading back from an ABC loop, walking by Bagel Bagel when we saw Steve ride by on his road bike. As he looped around to come greet us, he had the not so brilliant idea of trying to be cool. He came, full bore, rear wheel locked up slinging it out powerslide right up to our feet – on his road bike. For a second, maybe even two, Cortney and I both thought that he looked cool as ice. Now, that is someone with some skill. Some may try that on a MTB in the dirt, but rarely does anyone have the nuts to try to pull that on pavement on a road bike. Now I know why. Boom, boom, pow. Steve don’t got no style…. Not only did he crash, AND flat, but he also shredded his rear tubular. The good news is that we had plenty of time to catch up with Steve on the long walk home. 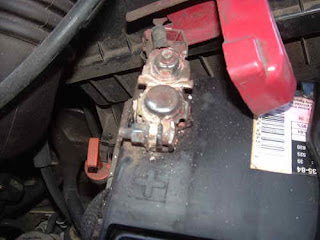 Another birthday in the books. This blog’s title pays homage to my years – 38. Friday was actually my birthday, but it was a pretty awful day. The only saving grace is it was bracketed by time with my wife and kids. Cards and hugs and kisses in the morning, then on to a small present and impromptu visit to a high school football game in the evening (Casey and Mia had a blast). I had a good time as well and it was funny to check out a real life Friday Night Lights.

Saturday was not much better because I had to work. Mia begged to go on the morning’s first run so that was nice. On to work while the rest of my family spent time with extend family in town for Justin’s wedding. On to my cousin-in-law’s wedding at Goodwood. Very nice affair. It’s still a small world and I bumped in to my man Bob with AB. He opened the door to talk about 180 Energy so obliged. I stepped through it and next year’s sponsorship looks promising. Not a done deal but it looks good. I asked one of my other cousin-in-laws – Cord – if he’d been riding any (we sold him a Caloi back in the day). He played the question down but said he brought his bike. The beer had been flowing so I’m like “,dude we got to ride in the morning. I’m talking early!” Much to my horror he said yes.

So we’re rolling by 7:15 at Tom Brown on Sunday morning. No BS, I feel great. I ask him want he wants to do and mentions he’s heard of Cadillac. So I alter our course and lead him through part of Tom Brown, Cadillac, Piney Z and then the lollipop loop. We hit all the cool sections and loved every minute. Fitness level wise everything felt great. The only time I ever felt dead legged was climbing up the sissy route from the dike. We get back a little early and decide to hit some more singletrack at Tom Brown. It was one of the best rides I’ve been on in a very long time. Back at home I burn the next 8 hours renovating the kitchen.

Woke up yesterday and it was back to the grind. I was dead tired. Beat. I was starting to get grumpy. Then I did some thinking. What I’ve found is we all can fall in to the trap of focusing on the negative. That is what I was trying to do. In what was an otherwise aggravating set of circumstance and a not-so-great birthday weekend – there were some pockets of positive times, and some truly great times. So that’s the focus now – positive. 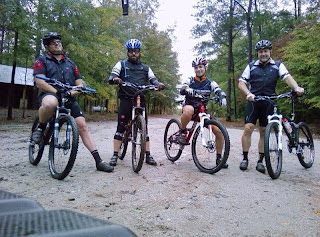 Wow, what a fun weekend of mountain biking. Saturday had me, Big Worm, Wrecking Ball and Spanish Mackerel loading up the truck and heading to middle Georgia for some mountain biking fun.

First stop was the Boy Scout camp (Camp Thunder) near Thomaston. With well over 2,000 feet of climbing per lap, past trips on this trail have turned out to be more hiking than biking, but this time it seemed to be the opposite. It’s amazing what you can do when you settle down and just find a grove. Big Worm decided to do things the hard way. About 2 miles in, and during the second climb, he breaks a rear derailleur. So now he’s down to about 3 gears. This is not the place to limit your gear choices. Riding behind the big man you would never have known he had a problem. He rode all the climbs the rest of us made and cleaned some that we couldn’t. The Mackerel gave his best impression of a mountain goat while running his mouth during the climbs. Me and WB were devising a plan to toss him over a cliff while at the same time breathing through our eyelids.

After the ride we head for Macon and try to find the big man a derailleur from one of the bike shops. After several calls it was not looking good as none had any level of Sram for purchase. As luck would have it, one of the wrenches offered to sale his XO off of his personal bike…..SOLD. So we get to the shop at closing time and the deal was done. Oh, and it must be said that Big Worm was “recognized” in the shop as a GSC participant. I made sure they realized that he was not only a participant but the GSC Clydesdale champion.

After checking into the Hotel, getting cleaned up, and drinking a few beers, we head out for some Mexican food. Good stuff, and hey since we are not racing the next day (thank God) why not hit Baskin Robbins for some ice cream. Seemed like a good idea at the time. Back at the hotel there was mention of a ten o’clock run to Five Guys Burgers but, thankfully, cooler heads prevailed.

Sunday we get up early and hit the free hotel breakfast before loading up the truck. Before heading to Dausset we hit Dunkin Donuts for some iced coffee and donuts (did I mention not a race weekend…THANK GOD). Off to Dausset we go. Unlike the day before, Sunday was gorgeous (sunny and cooler). The trails were a mess due to all of the rain days before. Very slick, and very muddy which made things interesting. Not even half way through the ride Big Worm, you guessed it, breaks another part. This time his saddle rails have snapped. He gives it a go for a while but decides he needs to head back to the truck. He hands SM the map, gives a few instructions and we part ways. Me, WB, and SM hit the “huff and puff” section of Dausset and struggle with the mud and water. WB was about to blow a gasket (bonked) and I’m having some “intestinal” issues (which I’m sure had nothing to do with the diet I enjoyed while on the trip). Overall another very fun ride.

Load up the truck, stop by JB’s BBQ, then head to the house. I can’t wait for the next guy’s weekend (RACING NOT INCLUDED).