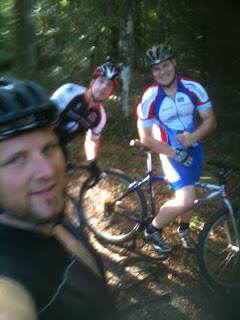 I’m still not entirely sure this ride happened. I went to sleep Saturday night, in a fevered state of soreness and exhaustion, after Big Jim Slade suckered me into another ride where he drops the ever loving bejeezus outta me, and leaves me for dead. I whimper and shake until sleep comes fitfully.

I awake to my own home, but something feels different; can’t quite put my finger on it, but it’s different. I head to the kitchen as if driven by some innate knowledge that I need to fuel for a ride. Everyone is out of town, though. Except BJS, and he sucks, but is trying to atone for his sins at church this morning.

As I eat my peanut butter and waffle sandwiches, and giggle to the humor of Sweet Home Alabama (You’ve got a baby…..in a bar!), there comes a gentle knock at my door. Who could it be? Mister Rogers? Captain Kangaroo? Even better, my mythical, magical satyr buddy, Spanish Mackeral is dressed and ready, with cross bike at hand!

We rolled out easy, amidst a hazy morning of pixie dust and talking blue birds. The 3 of us made our way to the Ochlockonee River Wildlife Management Area, to seek lost trail.(Lost to us anyway!) I was so blown away by the sheer fairy tale nature of riding with these 2 white elephants(not a fat joke), that I kept expecting to round the corner and see Asland the Lion, and the Mad Hatter having tea, or maybe Lil’ Ronnie with hair!

In our quest this day, we battled many an evil thorn, a vicious horde of blood letting, battle mosquitoes, and apparently one shark, as I had to stop and pull 2 of his teeth from my front tire. It was a glorious day of victory, for 3 guys getting their old school, core group, ride on!

(You’ll have to forgive the blurry nature of the pics. I simply had to document this event, but apparently the Narnia filter was still engaged.) 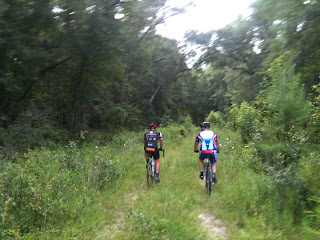 Who knew Satyrs and Unicorns were such good friends!

Rain, I hate you. Looking out my window lured me into a montage from the past. Check it out below. You gotta love the breakdown starting at 3:20. I should whip out the jammy and flat blast ya. A very gloomy Dragon 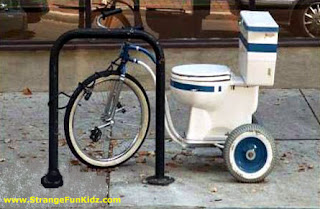 The last time I rode a bike was on a Sunday morning ride – when I supposed to meet the crew under the Blairstone flyover. Problem is I read Big Jim’s Facebook post wrong and was a day late. Latched on to some old friends and rode out the Fern to Tom Brown. I felt really good on the bike. That is until I bailed to get some riding in (because they were to busy stopping and talking). Grooving the lower section I caught a glimpse of some Bike Chain orange and black. It was D from Guardian. He made me suffer on some of the climbs up the multi-use – and he was on a totally rigid single speed. Other than that I rode pretty good. A glimpse of me back in the saddle. Then the bottom fell out, I sold my bike, hurt my back and otherwise off the friend-grid. So my return to two wheels will be on Sunday, August 1st. Who’s in?

Return of the Dragon 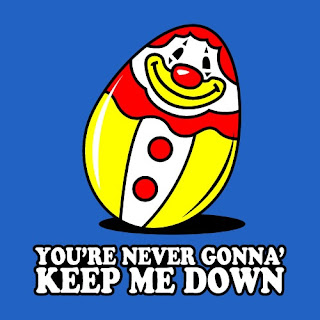 I hope this is not false… hope. I hope this nervousness I’m feeling is the good kind. A little on edge because the new boss starts tomorrow. Not because I’m not capable, but because I’ve lost the last six months to something I thought I wanted. Maybe I did, maybe I didn’t. I just know I put everything I had into it and came up short. That feels bad. Double down that I was up for one of my dream jobs but came up short on that one as well. That feels double bad. This post isn’t a request for sympathy, just an explanation of why I have been gone. With those dreams pushed further out of reach (at least for now) I’ve had to do some heavy thinking. Shut the door and sit in the dark thinking. I’m on the eve of starting a new chapter. A re-investment in the things I like and love – family, friends and bicycles. I’ll come by soon and re-introduce myself. I’m sure I be on the receiving end of some well deserved shit. Just remember the harder you push on a weeble, the harder they wobble.

In case you haven’t heard, there is yet another new government agency out there. It is for the relocation of racers who cannot bear to show their face again, ever, because of poor performance. Apparently they are not allowed to call, write, email, blog, etc, etc. Word on the street is that 007’s new location is known and its only 4 hours from here. Road trip anyone???