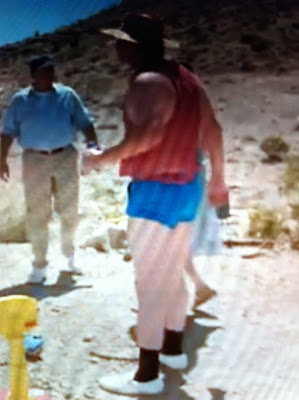 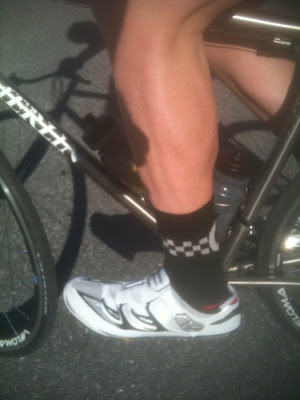 Big Worm sent me a picture of his new road shoes, all I could think about was the similarity to Cousin Eddie. 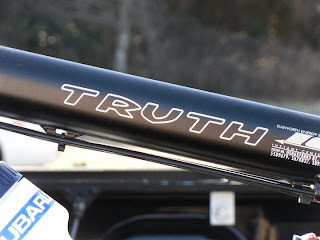 Well it started off way different than usual since some of the regulars did not show. Then, some who were still planning the trip could not go the night before. And, honestly, it really would not have been quite as fun anyway without the crew that had to bail anyway. For those that do not know: Felasco is usually a reunion of sorts for a large group of old school riding friends. We typically get dressed up (as in dressing silly – think halloween) and do a whole lot of drinking and bs’ing on Friday night.
Anyway, a few truck loads of us headed down day-of. Without too many problems, we got rolling at 8:50am. BJS and I got a one minute late start due to some Garmin difficulties. We caught up quick enough and rode with the crew for about what seems like 10 minutes before Iceberg had to stop to change a flat. Some of the slower crew crept on so we could catch up. After the 10 minute flat repair, we got rolling again. Then, after about 5 more minutes we erroneously followed the signs for the 62.5 mile option. (Read – we wanted to do the 62.5 miler instead of the 50 miler) At the fork in the trail, we went the way that said “62.5 miles this way”. Well, it wasn’t so simple. That section cut out about 10 miles of singletrack and traded it for about 5 miles of dirt roads. It turned out to be a shortcut with less fun riding conditions. Thats is where we all split up. BW said screw it and finished out his ride solo plus added on the extra at the end for a total of 55 miles or so. Derwood, Iceberg and myself tried to do a few extra loops before teaming up with SteveA to finish out the 50 at a moderate pace and getting in about 45 miles. Jim and Zak went all the way back to the source of the mistake and finished out the 50 for a total of 53 miles or so. I really and truly do not know how anyone elses ride went. I do know that my group waited over an hour at lunch for Jim and Zak before assuming they must have had a mechanical and were at the truck waiting for us. BW rolled in, tried to ignore us, and rolled out in quick form at lunch. We finally started setting pace for the parking lot, thinking everyone was waiting for us. Since we had Steve with us, we were backing off the throttle every once in awhile. He finally told us to cut the rope at the last sag. He wanted to be set free and said he would limp it in. We tore off and got back to nothing. No Jim. No Zak. No Chris. After an unknown long amount of time, Jim and Zak rolled in. Then after an enormous amount of time, Chris rolls in. We didn’t know it, but hoss decided to go back and get all of that 62.5er. Due to our complete lack of organization, none of us knew what was going on. We (the main group) decided against 62.5 and just assumed that was the new consensus. After another 30 minutes of standing around we finally were able to go get our after ride lunch at Conestogos. Country fried steak as big as your face. It was good, the stories were good and no one would step up to the 3 pound burger challenge. All in all a few lessons were learned and I hope to remember them next year: 1. it was weird (and easier) to do Felasco while sober and not hungover 2. going fast is easier than going slow 3. 4 hours and 10 minutes of roll time should not cover a 7.5 hour span 4. Kent, Steve, Terry and Ron add a lot of laughter to the crew dynamics 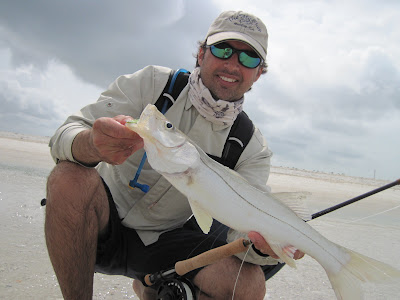 This is my fishing buddy, Chris. He would definitely fit in with the Bikechain crew. He is Rule #5. This guy is going to get his head cut open for a third time due to a stubborn brain tumor and cyst. Imagine being sea-sick for two years on and off, I would have killed myself by now. The reason I bring this up is because I plan on using his and Wrecking Ball’s situation as perspective this year. It makes me realize I have no reason to bitch, piss and moan, cry, or complain about anything.

I will miss riding Felasco this year, I will be at the hospital with fingers crossed for my buddy getting his coconut cracked again.
Anyway, see you guys on the next trip…..Tour de Tallasco?