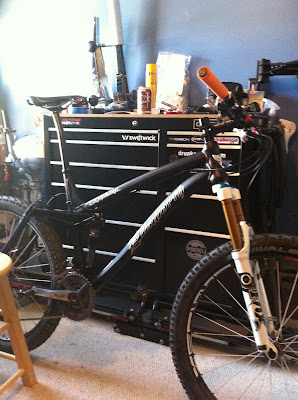 Kent called me early this year screaming, ” You ready, you ready for an Ellsworth?” I like a chump, said “Yes”. There was nothing wrong with my current ride, just time for some thing different. I am a sucker for “supporting the cause”. Such a sucker, I have branded myself for life with the symbol of the crew. Kent was hounding me and I ordered a large Epiphany in black with black rockers and a black bling kit. I have a little OCD(Big Jim understands, we were separated at birth), so when Kent called me and said he should have it in a month, I was less than thrilled. Good news is that I had time to unload everything I owned on eBay so I could pay for this frame.

I got it with all my parts and after two rides, I couldn’t get the seatpost to stop slipping. Most would be pissed, however shit happens and it was time to eat the shit sandwich. Made in America by hand, maybe my bike was made on a Monday morning or Friday afternoon. The biggest problem was they didn’t have another large black Epiphany, so the waiting game begins again.
Ellsworth came through and I got my frame, they even sent a hydration pack to ease the pain. Everything went together without at hitch. I always figured suspension is suspension, and all this mumbo jumbo about VPP, DW Link, Horst Link and Snoop D O Double G was just another way for companies to try to market their bikes. Ellsworth uses the ICT, and I got 140mm of it.
I have to say…I dig this bike. I am not saying that because I bought one, I am saying it because this is my ideal bike. It sits right between a race bike and a trail bike. The ICT suspension feels like it is endless for a 140mm(5.5in) bike. I don’t race, but I could with this bike. I could take it anywhere in the US and be just fine. By the way, it is about time for another NC trip Wrecking Ball and Big Jim. We just have to keep Big Squirm from getting his period again. There is a lot of beer in Asheville we didn’t drink.
Just wanted to give Ellsworth and Zone 5(Kent) my approval for what it is worth. There is something to be said for “Made in America”. Feels pretty good to buy American when I can, no matter what the wait is.
Zak “Little Ball” summed it up perfect. He named my bike Oprah, because it is big, black, and worth a lot of money. See you guys soon.
Thanks Kent.