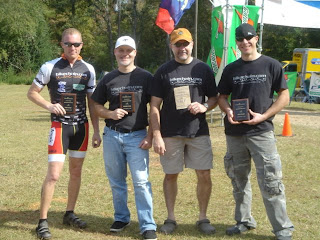 This past weekend, bikechain.com had to split up teams. David Berg and crew represented in Miami, FL for the Florida State Championship Series, and we had a crew throw down in Callaway Gardens in Pine Mountain, GA. Well, David did what he likes to do; win. An early encounter with another racer left him racing as a singlespeed in the rear, only able to shift between big and middle ring in the front. An additional crash put him finishing out the race with a pretty banged up shoulder. Tom and Graham Gillis put forth a solid effort until the sharp coral took care of their tires and caused them flat induced DNF’s. Tony (Atomic junior) had a strong run and finished in 4th.

The PMC (Pine Mountain Crew) posted a first place in expert (Darien), a first place in sport (Mark), a second place in beginner (Kent), and a DNF(Jim). This course was super fun. It was all double track which goes against all traditional singletrack mindset, however, it was fun none the less. The climbs were not as tough as Bump and Grind in Birmingham, but they were definitely tougher than anything in Florida. The descent was so fast that you were glad it was double track, just so could stay out of the trees. It was a 27 mph big-ring small-cog 2 mile descent over loose gravel, roots, through creeks, over water bars, etc that had a pretty good hold on your attention. The rocks were so unforgiving that they caused flats for all of us. Jim flatted and DNF’d because of it. Darien flatted, changed tubes, and still won. I partially flatted, but since I was running Stan’s, I hit it with a CO2 – two times, and rolled to the finish line with 15lbs of air in my rear tire. Kent flatted, but it must have been a slow leak, because he didn’t even know it until after the race was over. Jim was in the lead when he flatted, and with less than 15 minutes left in the race, he was pretty confident that he was going to win. At least he walked away knowing that he was riding strong enough to win, and he learned a little lesson about flat tires.

Well, there are too many stories to tell, and not enough typing ability. So, there ya go, thats the gist of it. If ya need more details, you’re gonna have to get them on a ride. Charge up your lights……..